The Mongol Empire, that began when Temujin united the tribes of the Mongolian steppe and was pronounced became Genghis Khan, was one of the largest empires in history. This is the ultimate horse archer army, it rarely saw defeat in battle, sweeping all in its path. It’s troops were highly trained, exceptionally skilled and brilliantly commanded. The result is a lot of expensive troop types that will give a very small army if picked at 10,000 points if you don’t downgrade anything.

Genghis Khan formed his own personal Tumen, the Khans Guard (sometimes called the Keshik), comprised of some of the most promising warriors and the sons of his generals. They were an elite fighting force, like other Mongol tribesmen, they were superb horsemen and well trained to fight with spear, sword and bow. Their armour would be small scales of iron or chain mail, later on the horses were also barded (represented by the option to upgrade to armoured horse from 1218).

These units are the main body of the Mongol army, the Mongolian horsemen. They would usually be lightly armoured, often armed with a spear (or short lance), sword, but their primary weapon was the composite bow (so your models do not need to be modelled with spears, though it is clearer if they are). They would wear a long heavy coat belted at the waist, usually with a fur lined hat or helm. The clothing could be quite colourful, and not necessarily uniform.

Some of the Mongol cavalry also wore heavy armour (armoured Tumen in the list) they were more likely to engage the enemy in close combat (hence they are represented as loose rather than flexible cavalry). Like the Khans guard, the armour would likely be small scales or chain mail.

Other nomadic cavalry These are the cavalry from other nomadic tribes, similarly armed to the Mongols, though with no spears. they would likely appear very similar, though more generic horse archer figures can also be used.

Skirmishing cavalry Much like the unarmoured Tumen cavalry, but in pure skirmisher formation, these troops would not have spears.

Unarmed driven civilians The Mongols would often use civilians captured from previous raids as arrow fodder. The Mongols used this tactic across their empire, so most civilians would work for these troop types. In 1220, at the siege of Samarkand, the Mongols sent waves of previously captured civilians against the walls in the initial assault. When they broke and fled, the defenders of Samaraknd, thinking it was the Mongols that had broken surged out after them, only to be slaughtered by the real Mongols. This suggests they must have appeared to be fighting troops, so it would seem reasonable for this troops to have some weapons, though the certainly would not have any armour.

Building and Using the Army[]

This is a difficult army to use. It revolves around skirmishing cavalry (whether TuG or SuG), the troops are of high quality and well trained, but as a result they are very expensive. If you want to take any of the armoured cavalry (the Khans guard, armoured tumen, or Khwarazmian contingent) then you are probably going to have to look at downgrading some or all of your tumen cavalry, otherwise the army is simply going to be too small. You are also going to want a lot of command cards, horse archer armies are very card intensive, you will need the cards to be able to get your units back into the correct position after skirmishing/running away, some moves (turn 180 and move) require high value cards. It is also quite important to be able to move late in the turn, after your opponent, you want your archers to be between 2-3BW from their target rather than inside 1BW (you can skirmish with far less risk of being caught). 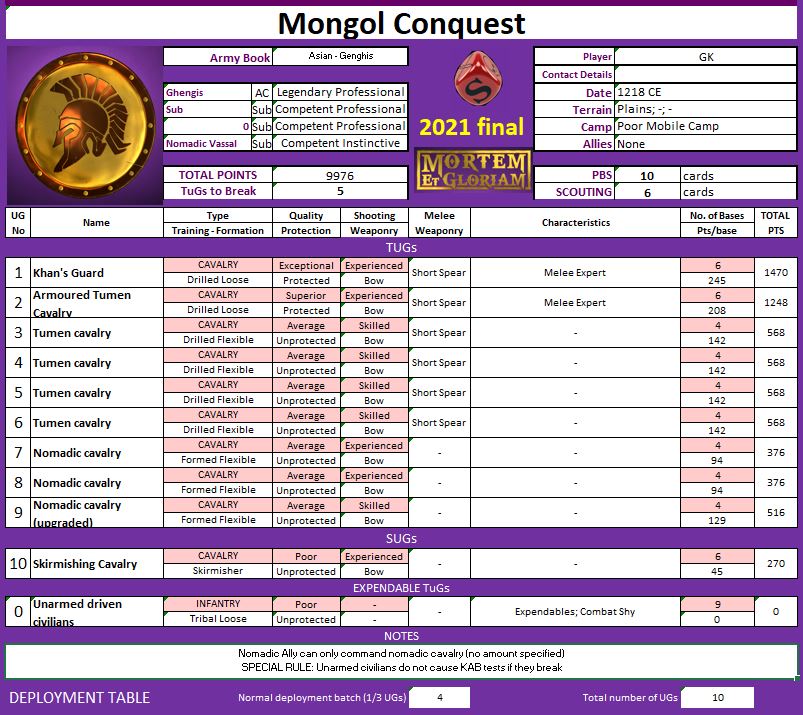 The list above is an army I have used quite a lot, with varying degrees of success. It is from the 2021 army lists (the 2022 list is the same but the cost of the mobile camp is reduced giving you a few more points to play with). I picked this list because I wanted to play with Genghis Khan as my general and I thought I had to make Genghis a legendary general, though it’s probably not the best use of points.  As mentioned earlier, with drilled troops and professional generals (especially a legendary C&C) points are a bit scarce, I have picked a competent internal ally as it saves a lot of points, with a small risk of the ally being unreliable. I use Genghis as a floating general, the internal ally is given command of just one unit of nomadic cavalry (he is only allowed to control nomadic cavalry), this reduces damage if he decides not to fight. You can also use him as a card sink (you can discard his spare cards to pass), you are likely to get a good enough card to move the unit with the general upgrade from three new cards. The two competent professional generals command five UG’s each. Genghis is placed with the Khans Guard. The Khans’ Guard and the Armoured Tumen Cavalry are the armies two fighting units (ideally you would have 3 in a horse archer army, but this is an expensive army), because ideally they should be doing their damage in combat, I have downgraded them both to experienced bow. The skirmishing cavalry are there to stand in front of other archers, to stop the unarmoured cavalry being shot to death (I would like a lot more than one UG).

In the pre-battle system, you are normally aiming to get minimal terrain, unless you have a strategic intercept, defending is often the best option (against some armies the first move might be important), this gives you plains as the terrain type and you place the marker at the start of the PBS. With 10 cards you should be able to keep the terrain down to a minimum, there is a pretty good chance you can hang on to a couple of good cards for scouting.

The aim of this army is to shoot you opponent to death, avoiding combat with your tumen and nomadic cavalry, whilst the Khan’s Guard, supported by the Armoured tumen, cavalry punch a hole, usually on one of the flanks. It is quite a small army, so you are usually best concentrating your fire, picking on one wing of your opponents army, using just a few units to hold up the other flank (the internal ally and his one unit are usually deployed on the far flank). You need to be vary careful with your TuGs, 5 is a relatively small break point and most of your TuGs are small. You must make sure you get the Khan’s Guard stuck in, that unit costs nearly 15% of your army, and you have a Legendary general with them. You almost always want to be in a position to break off with the Khan’s Guard, not only does it mean you get an extra round of charge combat the next round, but also because you can then fight with Genghis. At the start of the turn Genghis passes out all of his command cards to his two sub generals, he can then fight in both the charge phase and the combat phase, but if you do not break off at the end of the turn, he will be in combat at the stat of your next turn and he cannot gift his cards. The Armoured Tumen cavalry should normally be in a position to support the Khan’s Guard, they are pretty tough themselves so you want to get them stuck in as well if you can. With small tumen/horse archer units you need to be careful with them, you don’t want them to get caught. As often as possible you want to move them after the UGs facing them, to keep the right size gap. Don’t be afraid to run away, rather than skirmish if there is a risk of getting caught (sometimes you have to risk the 1), better to shoot less effectively and live to shoot again. You also need to give careful thought to the angle your units are at and where they are going to go if forced to evade.

This is a difficult army to build and even harder to use, but it can be very fun to play with.


Goryeo Korean (1242-1250 CE) Book: Genghis (Later Asian Period).
This list has 3 compulsory units.
- Kwang-gun cavalry (Drilled Close, Ave, Protected, Charging Lancers with optional melee expert): min 4 as an ally.
- Kwang-gun spearmen (Infantry, Drilled Loose, Ave, Protected, Polearm): min 6 as an ally.
- Kwang-gun archers (Infantry, Drilled Loose, Ave, Unprotected, Exp Bow, optional Combat Shy).
The charging lancers are an interesting option, though I'm not sure the mix that well with the rest of the Mongol cavalry as they can't skirmish and are forced to charge, you would have to be very careful with them. The infantry is likely to be a bit of a liability though, they are quite weak TuGs and unlike the Mongols, easy to catch.

Uyghur Successor States Book: Tang China (Early Asian Period).
This list has 3 compulsory units.
- Noble cavalry (Superior, Unprotected, Exp Bow, Short Spear with optional melee expert): min 4 as an ally.
- Horse archers (as the other nomadic cavalry in the Mongol list): min 6 as an ally.
- Mixed Spearmen (Infantry, Tribal Close, Ave, Protected, Short Spear, Shieldwall) and archers (Infantry, Tribal Loose, Ave, Unprotected, Exp Bow): minimum 9 as an ally.
The cavalry don't offer anything you don't already get with the Mongols and the infantry is likely to get exposed and give your opponent an easy TuG to kill (the Mongols really want to be an all cavalry army).

The Pre Conquest Mongol list covers the period from 1100 CE up until Temujin united the tribes of Mongolia and was pronounced Genghis Khan. After the death of Mongke Khan in 1259 the Mongol empire broke up into four separate Khanates, each ruled by the decedents of Genghis Khan’s four sons, the Ilkanate, Chagatai Khanate, Golden Horde and Yuan Dynasty. Later on these fractured further, with the Chagatai Khanate in central Asia fracturing into separate tribes, represented by the Later Nomadic Mongol list. Later on the Timurid empire was founded by Timur, who claimed to be the descendant of one Ghengis Khan’s generals, and married Mongolian princess descended from Genghis Khan, the Timurid Empire was probably the last of the great steppe nomadic empires.

The Mongol Conquest does not appear as an ally for any list. The Mongols had allies, but during this period they were always the dominat force of any alliance.

Some manufacturers, I cannot comment on them as I have not used them myself.

Khurasan Minatures (note they are based in the US so will cost a little more to get them imported to the UK) https://khurasanminiatures.tripod.com/mongol.html

Community content is available under CC-BY-SA unless otherwise noted.
Advertisement